We welcome partners in the Mardi Gras Raffle for Hilltop Children’s House to support our programs. We have multiple levels to fit any budget, and all sponsorships are fully tax deductible.

Most are limited in number, but we’ll accept as many sponsors as are interested in partnering with us.

If you are interested in becoming a sponsor, email us at [email protected] and let us know! 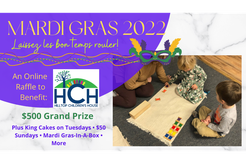